Born in april 1959 starts at the age of 12 years old to play the guitar with various bands. His artistic activity starts in the Rock field of the 70s, then, later in the years, moving to funky, soul and electro nujazz. Graduated in Clarinet at the Conservatory GB Martini of Bologna, he is the founder and component of the band Black Box (BLACK BOX Official site - Song's & Video's of the famous 90's band : http://www.blackboxhouse.eu). He starts his studies in the conservatory A. Boito of Parma. Today he is a famous Italian piano player/composer/arranger, specialised in Soul, Neo Soul, R’n’B, Funk Hip Hop and Fusion. Andrea often makes his public appearances in Parma performing with different bands and in different contexts.

The new project "ON THE 3rd FLOOR"

Maison Musiq is not a band, or rather, it is not just a band but much more: it is a
ensemble of great performers / musicians gathered around three passionate men who have dedicated their lives to music.
"On the 3rd Floor" is their third album, but the second under the name o
DETAILS Put Your Hand Of Me Feat Giordano Gambogi

Another new single product and made by Maisonmuisiq © 2017.The beautiful voice and interpretation of Giordano Gambogi makes the song of radio listening.Song of refined taste Soulful-house.
Its video and covers were made by Sauro & Virginia Malavasi.
DETAILS

Give On Me Feat. Eva Collicelli

Another new single product and made by Maisonmuisiq © 2017.
Track refined funky-house retro.
The beautiful voice and interpretation of Eva Collicelli makes it enjoyable.
Its video and covers were made by Sauro & Virginia Malavasi.
http://bit.ly/2oGZdt

The new video of MaisonMusiq© 2017

This is the first single produced by MaisonMusiq© in 2017.
A musical idea taken from an analog tape recorded by Sauro Malavasi, Gianfranco Fornaciari and Alberto Malavasi about 20 years ago.
Due to the interpretation and particular voice of. Some video of Maison Musiq LIVE 2016 in the "Gallery" page.

Eleven weeks with Maison Musiq
New video of the week is:
Rescue Me
https://itunes.apple.com/album/soul-district-2nd/id1116931292

Eleven week with MaisonMusiq.
New video of the week is:
Fly
https://itunes.apple.com/it/album/soul-district-2nd/id1116931292

Eleven weeks with MaisonMusiq
New video of the week is:
Feel For You
https://itunes.apple.com/it/album/soul-district-2nd/id1116931292

Eleven weeks with MaisonMusiq
New video of the week is:
Blue Love
https://itunes.apple.com/it/album/soul-district-2nd/id1116931292

Eleven weeks with MaisoMusiq
New video of the week is:
Father
https://itunes.apple.com/it/album/soul-district-2nd/id1116931292

Eleven weeks with MaisonMusiq.
New video of the week is:
Time After Time
https://itunes.apple.com/it/album/soul-district-2nd/id1116931292

Eleven weeks with MaisonMusiq.
New video of the week is:
Dirty
https://itunes.apple.com/it/album/soul-district-2nd/id1116931292


MaisonMusiq Nothing But You feat. Fre Monti

Eleven weeks with MaisonMusiq.
New video of the week is:
Nothing But You
https://itunes.apple.com/it/album/soul-district-2nd/id1116931292

The adjective for this new episode of Maisonmusiq is with no doubt.. FRESH. From the vocal intro you suddenly get that you are getting into an International environment, without effort, nor hesitation….FLY, open chords and a soul voice that brings you on the top of NY rooftop, surrounded by cockta 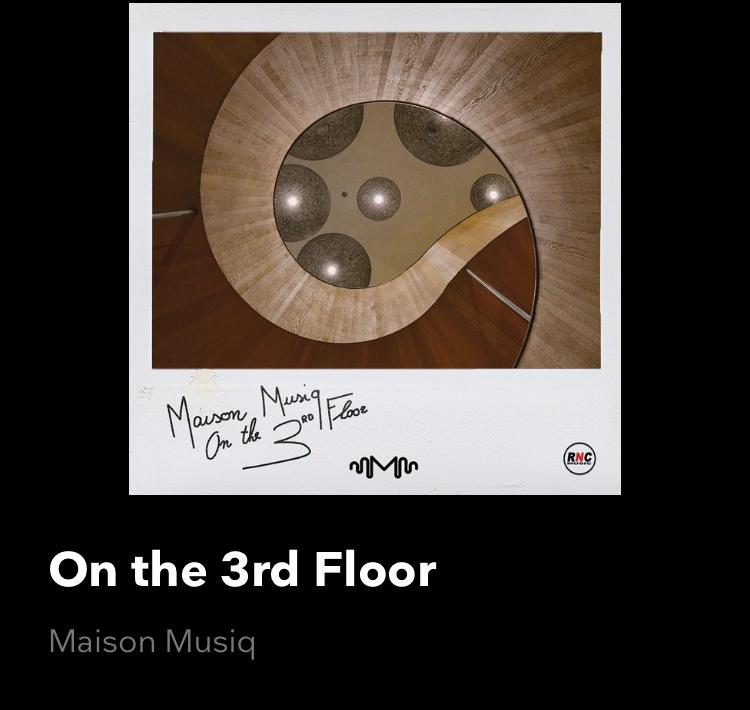 » Go to our second album

Renata Tosi has been appreciated for years as a jazz singer and performer. As a soloist and / or guest, she has distinguished herself in theaters and clubs (Milan terminus, Umbria Jazz, St. Anna Arresi, the RAI Auditorium in Turin, jazz festivals and reviews, television and radio broadcasts).

Born in the first half of the 1970s, married with three children. Before the Benassi Bros, Dhany collaborated with the KMC group (with Benny Benassi), making two singles: Somebody To Touch Me in 1995 and Street Life in 1996, which met with considerable success in clubs.

Michael Alfred, singer, rapper and evening organizer, began his career in 2003, first in the clubs of Modenese and Bolognese nightlife, and then expanded into other regions of the Italian peninsula. Parallel to his activity as MC (master of ceremonies), as a rapper in clubs, Performa with various music bands, singing and rapping ranging from reggae, rap, dance hall, up to rithm and blues.

Stevie Biondi, born Stefano Fabio Ranno, was born on 31 May 1989 in the province of Catania and grew up in a family of musicians: her grandmother in art known as Tina Adolfi, sang in the theater and for EIAR (the future RAI)

Born Komlan Edson Robert Dick, of Togolese and Ghanaian parents Eddy Mufasa made his debut as a songwriter composer, before taking the microphone in 2008 on the advice of his teenage friend Sido Black Pheno who offered him to remix a song.

Messalina Fratnic, Italian singer and dancer whose origins lie in the rich Romagna, in the capital Rome, in Serbia and in Sicily. Her voice bears the footprints of the Black Music artists who have always inspired her, from the Blues and Soul of the origins, to Pop, Rock and R'n'B.

Bassist, he discovers late (at the age of 23) that he has great talent, but recovers by studying and playing live immediately with the pop band Acoustic Jam, on various stages in northern Italy, and in Atlanta USA, where he plays some songs with David Ryan Harris , soul singer and black guitarist now of John Mayer. He also records with them an album of original songs, and then joins on tour with Ridillo, a well-known funk band, in various Italian clubs and festivals He started playing the guitar at 8 and up to 16 he studied rock, blues, pop and funky with various teachers, including: Daniele Morelli, Oscar Corradi and Luca Lanza, then the spark for jazz struck. Subsequently he attended the Berklee School seminar in Umbria jazz 2002, with Pat Martino and the following year he entered the Civic Jazz Academy in Milan, studying with Franco Cerri, continuing his specialization in jazz and gipsy-jazz with the master Carmelo Tartamella.

Danny Losito, real name Donato Losito (Gioia Del Colle, 8 April 1965), is an Italian singer and dj. In 1990, together with Davide Domenella , he founds the Double Dee, then, in 1996 creates the group Kaigo in collaboration with Gianluca Mosole. Francesco Monti, alias Frè was born in  Formigine, the 5th of May 1987. He starts to play the guitar at 6 years old, winning several musical contest at national level and eventually he takes part to the Ferrara Buskers Festival and at Soave Guitar Festival. Composer, great arranger. Giovanni Amato is a musician  with an exceptional swing touch together with a “scorrevolissimo fraseggio boppistico. His touch, both soft and powerful at the same time, the musicality versatile and spontaneus are his features.

Johnny begins his career at the end of the '70's with the band “No Quarter” interpreting songs of Otis Redding, Rolling Stones and classics of that time. From the mid '80s Jhonny makes a shift to Willy the Ville, Springsteen and Van Morrison, thus founding the “B-movie”.

Born in Mantova the 28 of June 1965 started the study of the classic piano at the age of 10 years old under the guide of M° Marco Martini. N 1990  founds Luca Savazzi Trio who is still present in the Italian  Jazz scenario.

Marina Santelli was born in Viadana the 23 of August 1985. In 1997 takes part to the singing master-class  with Giulia Boschesi and is part of the school choir of Dosolo directed by Professor Marino Cavalca. From 1998 she starts to exibit publicly with master  Giuseppe Cominotti, in 2001 studies privatelyvocal  technique with Massimo Guerini.

Vocalist and guitarrist. Moris in june 2012 is selected as singer for the live concerts in the project dedicated to Jimi Hendrix. Work that leads him to record the tracks on CD and to participate to Umbria jazz, where also Paolo Fresu  played with his band. In 2013 he enjoys Mario Biondi for 22 dates in the major Italian theatres.

Born in Teramo in 26 September 1970, he begins very young the study of the piano under the guide of the father and graduate with honours in 1990 at the Conservatory of Bari.

The utmost characteristic of Paolo D’Enrico is his versatility in music, a feature that leads him to gain professional experience from Big Band and combo Funk/jazz to the pop music.

Singer, composer, author, Wendy Lewis was born in the province of the city of blues, gospel and house, that is Chicago.

All our videos and photos 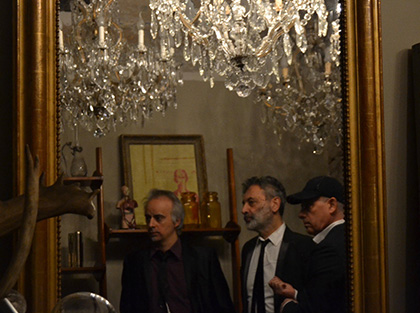 A selection of our photos 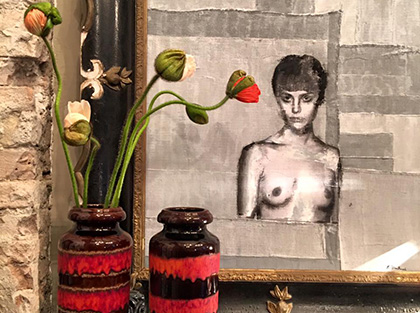